In Search of Wabi-Sabi, Part 1 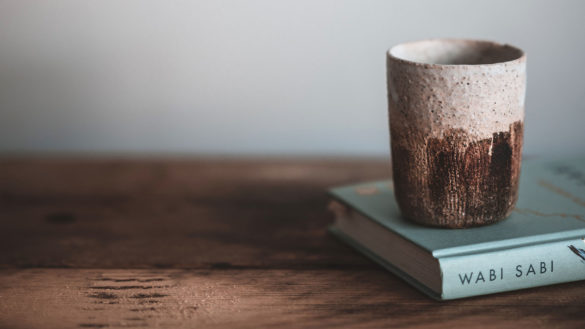 Of the various aesthetic philosophies originating in Japan, this is perhaps one of the most recognizable. Often simply called “Japanese minimalism” or summed up as an appreciation for “imperfection”, reducing this concept to such a simple explanation removes much of what it actually means and represents.

As part of my studies into the history and culture of chanoyu, I started digging more into the idea of wabi-sabi and its origins. My journey thus far is centered in the dense but enlightening book “Wind in the Pines” by Dennis Hirota, which is the source for all the things I’ve learned and shared in this article.

I can’t wait to start sharing what I’ve learned, so let’s dive in.

By the end of the Kamakura period in Japan (1333), modern society was characterized by a fervent adoration for all things Chinese. At this point in time, the Japanese were holding tea gatherings of a similar but different nature from what we now know as tea ceremony.

These gatherings were mainly social occasions for the elite. They engaged in the appreciation of beautiful settings replete with precious Chinese artifacts, such as tea bowls and paintings, as well as activities like incense and tea contests. There was also a collaborative/competitive style of poetry in vogue at the time called renga, which was recited during these gatherings. More on that later.

The main takeaway here is tea was primarily about the rich enjoying how rich they were, showing status by displaying the collection of their fanciest Chinese goodies on low wooden desks adapted from the type seen in Zen temples called shoin.

I’ll refer to this as shoin-style tea for clarity (Hirota uses this term but I don’t think it’s official or anything). It was from this ostentatious display and celebration of wealth reserved for the upper crust that a counter-culture began to take hold.

At this point we’re out of the Kamakura period and well into the Muromachi Period, which started shortly after Kamakura (~1336-38) and extended until 1573. This is the time in medieval Japanese history we most commonly associate with samurai, and is also commonly referred to as the Warring States Period (Sengoku Jidai), a term borrowed from China’s own history.

In the late 15th Century, the outbreak of the Ōnin War ravaged Kyōto, laying waste to large swathes of the ancient city and traditional capital of Japan at the time. At the same time, shōgun Ashikaga Yoshimasa built himself a new tea room. This tea room, far from the expansive and luxurious shoin-style chamber, was a condensed four-and-a-half tatami mat space. This was significant for a few major reasons:

The change from hall to small chamber was not a mere condensation, but represented a shift from a rigidly hierarchal social setting to one that deemphasized social station and created bonds among peers.

Even at this point, we still see the use of fabulous Chinese ceramics. Attendees were also likely not making their own tea at this point, either. Rather, trained Buddhist monks were likely preparing tea in external chambers and bringing it in for the guests.

However, that slowly began to change. First, a shift away from the brilliant, colorful style of China and towards more muted, subdued tones. This included the use of elegant celadon and dark-hued teaware, as well as a preference for monochrome paintings. Then, a more familiar ceremonial preparation of tea involving a lacquer daisu, a decorated wooden stand originally brought over from China for use in Buddhist ceremonies.

From there, even more Buddhist influences infiltrated the tea room. The Heian Period (794-1185 CE) preference for the austerity of a hermit monk’s thatched hut came to the fore. At last, we’re starting to see tea come to resemble something more familiar to us modern practitioners.

Shoin-style tea was a celebration of connoisseurship and education available exclusively to the elite. It involved the appreciation of perfect Chinese ceramics and paintings only possible to the upper crust. By contrast, what was happening at this point in the mid-16th Century was about as far away from that as possible.

The ideal of the hermit’s thatched hut is the rejection of all worldly concerns. It allowed for the inclusion and enjoyment of local, Japanese-made implements and wares.

This also introduced a paradox: how can you be both pretentious and unpretentious at the same time?

These three men are the ones most commonly referred to as the ones responsible for sheparding the transition from shoin-style to wabicha. Each of them are giants in the history of chanoyu:

I still have a lot to learn about each of these characters. As I am learning in real-time in order to write this stuff, this feels like a good stopping point to give me some time to continue my studies and synthesize my learnings.

Pausing for A Bowl of Tea

Up ahead, we’ll get deeper into what exactly wabi‘s aesthetic is. We’ll look at how a group of renga poets and Japanese nō practitioners defined the concept of wabi.

If you want to make sure you don’t miss out on future installments of this series, sign up for the email newsletter using this link or the form down below.

Also, I’m super curious to hear what you think about this kind of writing on the blog. Are you down with the deep-dives into the history and culture of tea? Or are you just here for some tea tasting notes?

The Solitude of Western Tea Culture