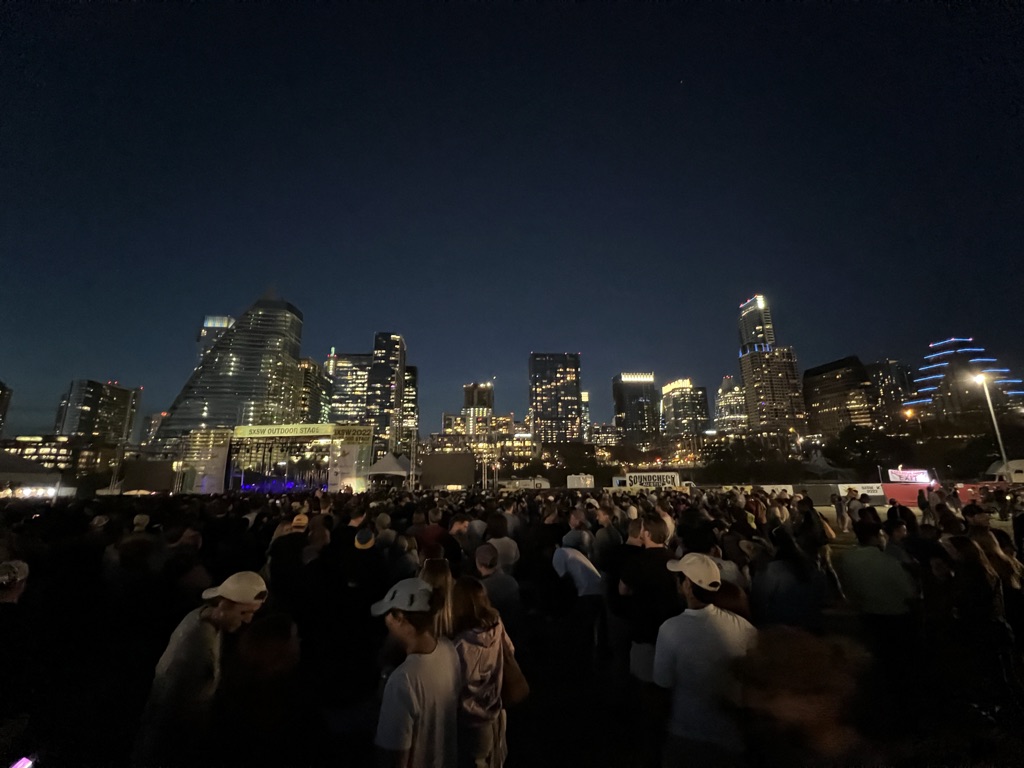 South By Southwest (SXSW; called “South By” for short) is finally over. I spent most of 8 days crawling around the city of Austin, sticking my head into various tech exhibits and listening to more live music than I ever have in my life. After seeing so many musicians giving it their all on stage, I think I learned something about artistic bravery and courage.

As you might expect, a festival the size of SXSW has a huge range of music on display. There was literally something for almost everyone. Because of the number of bands playing, I didn’t really do much research ahead of time. Instead, I wandered around a few different venues and simply watched whoever was performing there. This exposed me to a large number of different types of performances and genres of music.

Most of it wasn’t for me, though I always tried to stick around for a few songs to make sure. However, what I recognized in many of the performances I watched was the talent and dedication to the art on display in each individual act. Even if I didn’t find myself enjoying the music, I did find myself enjoying watching the musicians. I thought about how they made their sound, the way they wrote their songs, and the instruments each of them played (lots of Fender guitars). I thought about all the choices, big and small, that lead to their arrival at a SXSW stage.

For artists who make the cut, SXSW can be a watershed moment in their career. One UK band, We Were Promised Jetpacks, said their first show ever in the USA was at SXSW in 2008. They’ve gone on to have their music featured in movies and video games, with their main hit “Quiet Little Voices” streamed over 24 million times on Spotify alone.

I stayed up to catch their 1 A.M. set so I could mosh with them and the crowd in the dust of the Hotel Vegas outdoor stage.

Everyone–both artists and attendees–knows this about SXSW. As such, every act wants to display their best, in hopes of converting casual viewers to new fans. While some bands were bigger, more experienced, and more polished than others, every single person that played on a SXSW stage did so with the full force of their artistic passion.

The experience left an impression on me.

I was inspired by the sheer breadth of creativity on display. Every show was an example of how humans can express a vast range of emotions and ideas through music. As an artist myself, the ability to create music with such authenticity and honesty made me jealous. I watched them intently and crowded close to the stage, as though I could siphon off some of their vital essence via osmosis.

There was TV’s Daniel, with a lead singer wearing a suit that looked like he walked out of a soul-crushing corporate job right on stage to scream in existential angst at the world. Then there was Beauty School Dropouts–four guys from LA tucked away in the back of a cocktail bar melting the faces off twenty people with high intensity scene rock. Dead Tooth blasted three guitars and rock vocals alongside a saxophone player so drunk I was sure he was going to pitch off the stage. Walt Disco delivered intense 80s glam rock, while Marina Allen served up soulful singer-songwriter vibes that reminded me of folk rock greats Joni Mitchell, James Taylor, and Carol King.

Finally, W.H. Lung. They were the star of the festival for me–a complete and utter surprise arriving in full force from the UK with a brand of krautrock and synthpop that had me dancing in a way I haven’t done in a decade.

I finished SXSW feeling physically exhausted but spiritually invigorated. It made me want to write this piece. I’ve long struggled with the courage to write my authentic self. But I figured, hey, if the trombone player in that one experimental jazz ensemble I saw can solo shamelessly for minutes on end, then maybe I can embody a bit of that bravery in my own creative pursuits.

It’s not easy to be that brave sometimes. Writing one’s true self is both an act of ego and vulnerability. When I feel my writing is rejected or unrecognized, it’s an arrow to the heart. One of my great challenges has been embracing the “selfishness” in my writing, because if I’m doing this for me then who cares what anyone else thinks?

You’re not likely to see me up on stage at South By Southwest, but I think I’ll try a little more “South By” style courage in my writing.

Until next time, happy drinking.