The Process of Thoughtful Tea Drinking

The first article I wrote on this site was almost entirely about flavor, where I discussed the flavor wheel, what I call “thoughtful drinking”, and keeping a tea log to remember each unique tea drinking experience (brewing parameters, notes, etc.). The goal of that whole process is to build a tasting vocabulary in order to better explain and understand tea while also identifying types of favors you enjoy. I consider this piece a bit of a companion to that one. The goal in this piece is to dig a little deeper into thoughtful drinking.

In my experience so far, thoughtful drinking requires two things: time and focus.

You cannot be thoughtful about tea if you’re gulping down it in a rush, nor can you think about what you’re drinking if your mind is busy doing something else. So the first step is to set aside a small amount of time to drink tea and do nothing else. For me, that time is around 20-30 minutes on Saturday/Sunday morning while my wife’s asleep (I even put it on my calendar to make it sacred).

With time and focus locked in, we’re ready to start drinking!

For me there are three steps to thoughtful drinking and each one savors a different part of the experience:

Tea can be incredibly aromatic. This morning I brewed a Taiwanese oolong gongfu style (something I’ll cover in a series of future posts) in my Chinese brewing cup called a gaiwan and the aroma was the first thing I got as soon as I started pouring the tea. For me, the aroma is a little taste of things to come (hehe). Since I don’t have an aroma cup, I usually pull the lid off my gaiwan and stick my nose in it quickly in order to capture the lingering scent of the freshly brewed leaves. 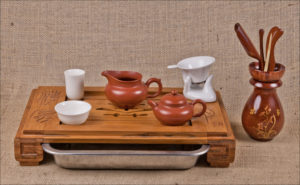 A traditional gongfu tea set. The aroma cup is in the rear left, behind the drinking cup. (Photo credit: Gaucho888)

The aroma tells me a lot about what I’m about to drink. I find the lighter aromas such as fruit, flower, vegetal, and what I refer to as “green” or “freshness” (scientific, right?) are easily detected in the aroma. I usually stick my nose into my cup for a moment as well before diving into drinking, but one should be careful with that. I have singed some nose hairs before on hot steam from tea brewed near boiling!

Obviously this is the best part. I like to exhale a bit before taking a sip, then breathing in with the tea in my mouth, drawing air in over the tea and into my throat and sinuses to “coat” my mouth with flavor.

Now, this may be different for everyone, but I have found roughly four stages of tasting  tea.
The first stage of taste takes place on the tongue and coincides with the placement of taste buds–sweet in the front, sour on the sides, and bitter in the back. After spending some time thinking hard about what’s happening on each part of my tongue, I’m starting to be able to pull apart a singular swallow of tea into its composite parts and look at and taste each of them individually (this is where the focus kicks in).

Sometimes I wonder if I should be creating what is essentially a caffeine addiction via my love of tea, but then I remember it’s definitely worth it. “Superior Taifu Oolong” from TeaHaus. Tastes like strawberry, sweet hookah tobacco, and there’s a kind of woodiness on the tongue.

The next stage involves aroma as it occurs in the sinuses. When I breathe air in after drinking I then hold my breath for a few minutes while the aroma of the tea rises into my sinuses. What I found is there’s a bit of a pocket of flavor that occurs at the rear of my mouth and the base of my sinuses where they open into the mouth. It seems to me sweeter flavors are easily detectable there.

The third stage is one I’m still working on, and that is mouth feel. Maybe I’m not brewing my tea strong enough to really pull a substantial amount of tea liquor out of the leaves, but I find most teas I drink to be relatively similar–with the exception of a few dark oolongs and black teas, which tend to have a kind of “earthy” feel that feels a bit rough like I’m swishing dirt or sand around my mouth. (It’s not nearly as unappealing as it sounds; in fact, I like that aspect of those teas a lot.)

The final stage is the general feeling I get when swallowing. I find some teas have a cooling or soothing feeling on the tongue and throat as they go down. Some warm me up or make me feel comfortable or at ease.

Not every tea has a notable or striking aftertaste, but spending a few extra moments thinking about what else is going on with your taste buds after swallowing is all you really need to find it. This morning’s tea turned from a somewhat muddled “berry” flavor into a soft strawberry in the aftertaste.

Something else I’ve realized as I’ve been thinking more about taste and flavor is I don’t typically think much about flavor as I’m  experiencing it. At least, not in the focused way I think about it while drinking tea. I drink or eat many things and sort of take the flavor for granted, for lack of a better term, and I don’t store that information in my brain to be actively recalled as needed.

What this means is, there are some flavors I recognize, but I don’t “know” in the sense that I’m able to taste it as part of a bouquet of flavors and identify it accordingly. Not yet, anyways. Hence the emphasis on thoughtful drinking. But this is why I consider my tea hobby just that–a hobby. I’m pushing myself to understand tea out of the pure enjoyment of doing so and the joy that a deeper connection with the world’s most popular beverage can bring.

On Taking My Own Advice

No doubt it’s a lot of information to take in. I try to take my own advice, but it can be hard to remember to do and think about everything when what I’m most concerned with is drinking and enjoying my tea. I usually drink tea in the mornings at work too and it’s basically impossible to put all of the above into practice when I’m working at the same time.

I’m curious to hear about the tea drinking experience of others. Is any of what I just described above familiar? How are others experiencing tea as they drink? I’d love to know, so don’t be shy and leave a comment!

A Guide to Tea in the San Francisco...

How To Control Water Temperature Without A Fancy...

Caffeine In Tea: Fact vs. Fiction