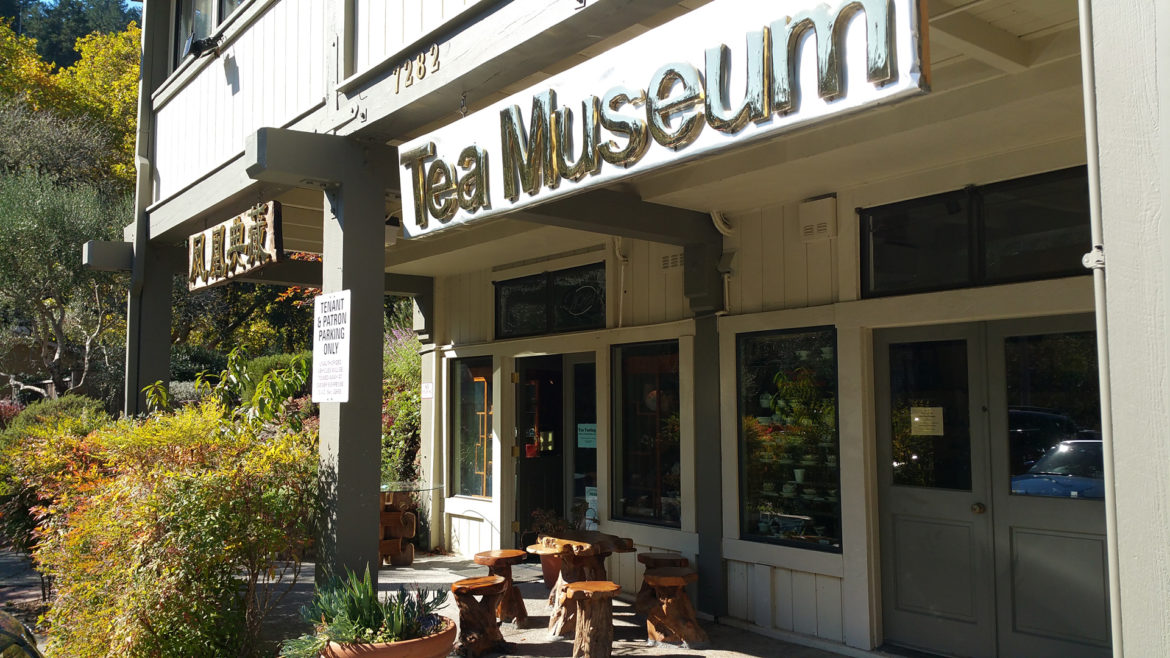 It’s not every day you get invited to meet a legend.

Some people never get close to the ones they admire. Whether it’s a favorite celebrity or someone who’s at the top of their profession, when these chances come along in life, you have to leap at them.

When my friend Anna (The Tea Squirrel) sent me just that kind of invitation, I didn’t hesitate to accept. We agreed to meet up bright and early on a Saturday morning to embark on an adventure that would leave us both changed for the better.

Never Judge A Book By Its Cover

On the end of a relatively nondescript strip mall, only a pair of signs–one written in Chinese (凤凰典藏) and the other in English that says “Tea Museum”–provides any sort of clue as to what lies within. The shop is open one day a week (Saturday) for only four hours from 10:00 AM to 2:00 PM.

Inside these two small storefronts lies a treasure trove containing some of the best tea money can buy. It all belongs to a man who spent the better part of a few decades collecting and curating all of it: David Lee Hoffman.

The Legend of David Lee Hoffman

David’s legend is well established in the tea world. Wikipedia credits him with introducing artisanal Chinese tea to the West. He is the original owner of Silk Road Tea and also the subject of the Les Blank documentary “All In This Tea” (available right now on Amazon Prime). He passed the reins of that company on to others some time ago, but later got back into the tea game with his new company: The Phoenix Collection.

He told me he’s been in the tea game since before The Great Opening of China in 1989. That is about as old school as it gets for foreigners doing anything in China.

The Phoenix Collection and Tea Museum

Anna and I arrived right as the shop opened. David hadn’t yet showed up himself, so we contented ourselves with fawning over the beautiful teaware and historical items that adorned the walls and cabinets all around us. A beautiful set of stoneware cups caught my eye, as well as a dizzying array of yixing in all shapes, colors, and sizes.

In the tea museum, some classic tea packaging, tea packed in bamboo stalks five feet tall, and some beautiful decorative bricks of pressed tea. It’s an impressive array of tea history and culture condensed into one small room on the side of the tea shop.

I’m particularly drawn to some silver (or pewter) statues of people in various stages of tea production, including my favorite stage: drinking.

With no pomp or circumstance David arrives and after brief introductions and very little banter, we sit down at the tea table to get down to the business of drinking tea.

It’s clear that behind the table is where David likes to be the most. He’s comfortable and completely in the space. His presence is palpable.

The tea starts to flow and the conversation along with it. David is an exceptional conversationalist; he asks open-ended questions and listens without judgment. At first it makes me nervous. I feel like a babe in swaddling clothes before the decades of experience and wisdom sitting across the table from me. But the tea continues to pour and it loosens me up a bit.

It’s an intimate moment with just the four of us at the table, but before long some other folks begin wandering into the shop. It’s an eclectic group with a few locals and regulars mixed in. Others are first-timers, like Anna and I. David manages to include everyone without missing a beat.

The Best Conversation Happens Over Tea

As the tea tasting progresses, the conversation touches a dizzying array of topics. On the subject of tea marketing and the appropriation of wine culture to describe tea, David’s opinion is it’s pointless. You can see that by looking at the menu of tea he has for sale on his website—all the right details with zero fluff.

You know what? I think he’s right. How can you know something is good without trying it? I decide to take a stab at focusing more on what I’m feeling through the tea we’re drinking and less on trying to quantify it with flavor words.

My recent post on mindfulness was partially inspired by this experience.

We talk about Chinese culture and navigating the foreign waters of China as an outsider (pro tip: when serving drinks at a table, always serve guests first and yourself last). We talk about the market for tea, and how it’s changed from a buyer’s to a seller’s market. These days businessmen from the city arrive to tea farms in BMWs on paved roads that used to be dirt paths unfit for travel by anything besides on foot or by donkey.

He also told us a story of how he once served a prize-winning Tie Guan Yin Oolong, worth tens of thousands of dollars per kilogram, to unsuspecting passersby at a tea festival. The large majority of people had no idea what they were tasting. They drank their cup and kept on going without stopping. Only a few paused, perhaps realizing they were tasting something special.

I asked him whether that bothered him at all, to which he replied: “When I was younger I had lots of opinions. As I’ve gotten older I realized they are just that–opinions.”

And of course we talk about tea. The Meizhan green tea cultivar is one David claims to have discovered and brought to the world. He believes it’s better than the much-hyped Dragonwell everyone’s so eager to drop big bucks for. If the Meizhan Green we drank is anything to go by (and I’m sure it is), he’s right.

We survey an array of black teas so different from one another it’s almost difficult to imagine they’re all lumped together in the same category. The Yao Qing Hua Xiang in particular is one that forever changed my perception of what a black tea can be like. It’s fresh, fragrant, and deeply floral in a way I haven’t experienced before with black tea.

We hit puer and man, David’s puer collection blew me away. The 1990s Old Tree Big Leaf Ripe made me feel like I was drinking the entire bush from root to tip. The 1980s Yiwu Sheng is breathtaking. Have you ever had a tea that smelled like beetroot and cooked pasta? This one did.

After eighteen teas I am so tea drunk I can’t even keep track of what’s happening anymore. My notes are incomplete because I’ve lost the capacity to think clearly about what’s going on. The intensity of the experience is overwhelming, and I’m simply floored by David’s generosity.

It’s now two o’clock and it’s closing time. Four hours passed in a flash but it felt like eight or twelve. Anna and I make our purchases and exit to a table outside to fill our stomachs with some carbs before the drive home.

We both leave having been transformed by the experience we had at the Phoenix Collection. The best part? It’s open to anyone who’d like to take the time to stop by. Here’s the website for more information.

I learned a few important lessons from my time with David.

David shared some of the most incredible tea I’ve ever had with zero hesitation or expectations. He gave of his time and knowledge freely, listened patiently and with kindness, and engaged thoughtfully in conversation with everyone who sat down at the tea table.

To David, I’d like to say thank you for your hospitality and generosity. Next time I’ll bring some tea to share.

You can read Anna’s version of this post here.

The mostly full list of what we drank is as follows:

For other tea places in San Francisco, check out my guide to tea in the Bay Area here.

(Photo credit goes to Anna of The Tea Squirrel and also myself!)

Tea Mindfulness: Meditation and Self-Awareness in A Cup